Colin Duncan recently visited the Neo Natal Unit and Dumfries and Galloway Hospital to present the unit with a cheque for £2748.81 which has been raised throughout Colins Captaincy as designated Captains Charity.

Pictured is Colin with his 2 Daughters, Rachel and Joanna and his 2 Granddaughters, Millie and Ada joined with the on shift staff at the Neo Natal unit in the hospital

Congratulations to the winners of the Club Championship held on Finals Day this year.

Congratulations to everyone who took part and for getting to the finals. Thank You to all the referees on the day also.

£1600 was raised for the Neo Natal until at Dumfries Hospital.

Winners on the day were the team of  Mick and Veronica Casson Nd Alistair and Brenda Cruden with 110 points.

Winners presented with the cup from Gala Queen Mikayla Geddes.

Thanks to all who played on the day and to Sandy and Sheila Grant for donating the trophy.

The conditions were very tricky as the wind held up all day and made the course play a lot harder in the afternoon.

Congratulations to all prizewinners.

Thanks to everyone who entered and played on the day. Many great comments regarding the course and the bar/kitchen service.

Trophy donated by the family of the late Janet Pollock. 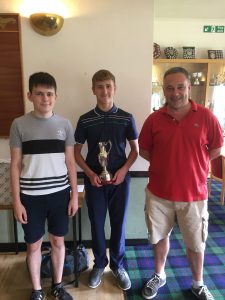 A long insight for coaching throughout the season at Lochmaben Golf Club.

Long term forecast is set to be a good day so we would ask for names to be up at the earliest opportunity.

Hope all the members have a good 2019 season